Go With The Flow With Artist Steven Harrington, The King Of Californian Psychedelia 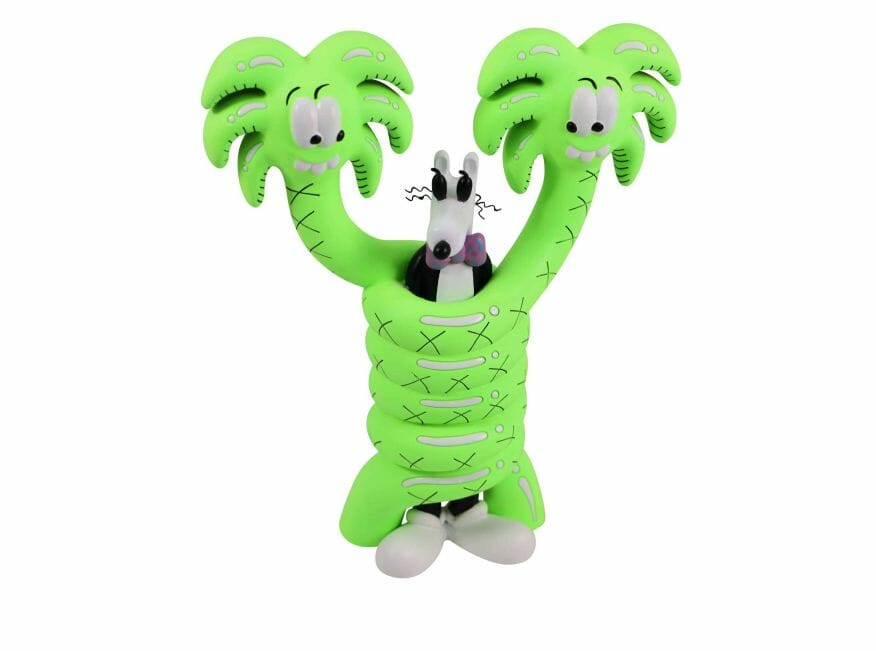 06 Jan Go With The Flow With Artist Steven Harrington, The King Of Californian Psychedelia

Steve Harrington’s trippy, playful and bright aesthetic has earned him the title “King of the Californian psychedelic-pop aesthetic”. His visual style helps people to feel, and that is exactly what he’s aiming for. Emotion is the name of his game, and he prioritizes direct stimulation over story telling. Some things, it would seem, simply can’t be put into words – but art is just the ticket.

Through his gently emotive pieces, Steven Harrington invites us to question, wonder, and probe our human experience in a kind, fun, and enticing way. For many, the process is an addictive one – as Steven Harrington’s exhibitions continue to draw crowds, and his merchandise and collectibles stir up a palpable fever-pitch. How did Steven Harrington come to capture such an intuitive form of artistic expression? As it turns out, his strategy was more going with the flow than executing a pre-defined plan. Somehow, we think that’s marvelously comforting.

Immersion In The Process

Steven Harrington was a kid who loved to draw. And, when he wasn’t drawing, he was painting – he loved to paint too. His parents encouraged his passion, and in his teens he realized that art was something he didn’t want to stop doing, so it better be something he was going to keep doing. A dedicated art teacher encouraged him to pursue his passion outside of school hours, so he started extracurricular college-level studies at the Art Center College of Design. After graduating high school, he couldn’t afford to continue his studies at the prestigious Art Center full time, so he detoured to Pasadena City College, where he built up a portfolio worthy of a scholarship.

It was back at Art Center that he met Justin Kreitmeyer, who would later become Harrington’s co-founder companion in the creation of design firm National Forest. As the pair graduated college, they realized that it was now or never if they were going to take an entrepreneurial leap together, so they took that leap, and never looked back. The unique vision and energetic output of the pair drew fast attention, and they quickly attracted high-level commissions from brands such as Rolling Stone and Urban Outfitters.

Zeroing In For Success

Steven Harrington attributes his success not to keeping a view of the bigger picture, but rather to staying present with the work. Speaking to The Great Discontent, he described what he perceives as the danger of over analyzing life’s trivialities: “if you get caught up in questioning yourself too much, then that imaginative, creative spark can easily vanish”. This free-flowing approach to art, in combination with his high-caliber design credentials, has allowed Harrington to build a power-house personal brand.

“If you get caught up in questioning yourself too much, then that imaginative, creative spark can easily vanish.”

His iconic vision has been applied to painting, illustration, sculpture in a variety of materials, and immersive large-scale installations. Collectible Harrington pieces include handscreened prints, skateboards, art toys, housewares, fashion goods, and limited edition books. Meanwhile, his work has toured the world, with exhibits as far flung as Tokyo, New York, Berlin, Melbourne, and many more high-profile locations.

Steven Harrington’s fun motifs, featuring multi-cultural and multi-conceptual references, lend perfectly to the world of art collaborations. His psychedelic styling has attracted partnerships with brands such as Coca-Cola, with whom he collaborated in the creation of a set of limited edition art cans, luxury stationary brand Moleskine, and a Disney x Nikon watch project. Many have long anticipated his recent work with Medicon Toys, for whom he envisioned one of the cult-status brand’s infamous [email protected] art toys.

An ongoing love affair with sports brand Nike has seen Harrington design official merchandise for the LA Rams, Seattle Seahawks & USC Trojans, alongside creating wall art for Nike stores, and design a sportswear collection in partnership with Roshe One designer, Dylan Raasch. Further fashion and art toy co-creations have included substantial collabs with Sneaker Con, MADGIBBS, and ICECREAM. Meanwhile, IKEA helped him enter the world of housewares, and Skateroom met destiny by placing Harrington’s art on limited edition skateboard decks. Vast sculptures of Harrington’s characters, such as his 28-Foot ‘Gotcha’ Sculpture in China and, most recently, his 14 foot ‘Mello dog’ sculpture in South Korea when appetites yet further for parallel art toy releases. At time of writing, the miniature version of the Mello dog is yet to drop. Who wouldn’t want a piece of the action?