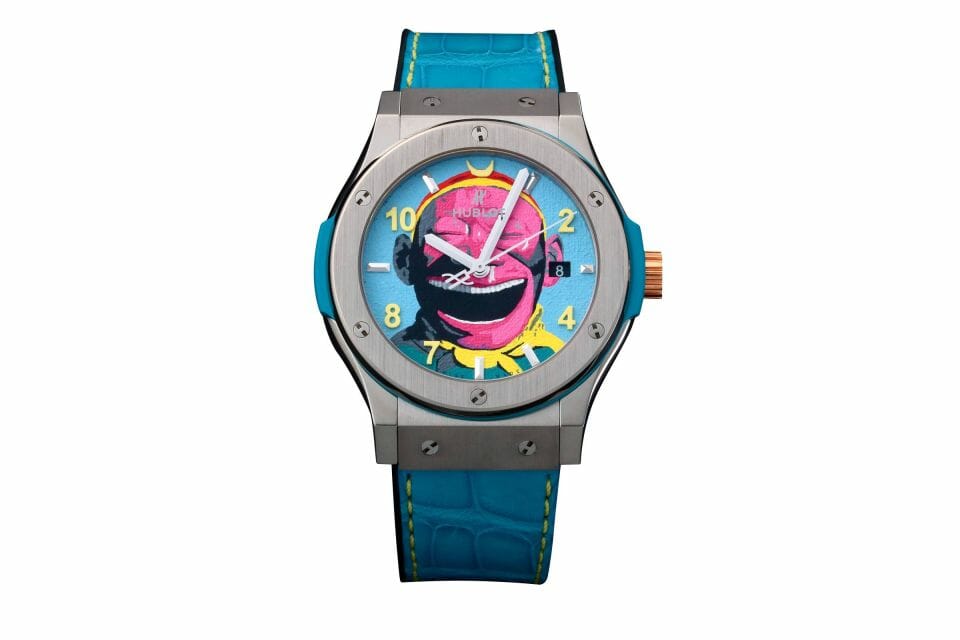 Zodiac inspired timepieces from the most esteemed watchmaker’s of the world have become a covetable niche for many a collector. Among this fascinating and often enchanting roster of wristwatches, none can compare to the Hublot x Yue Minjun Classic Fusion Wristwatch, created to celebrate the year of the monkey. This vibrant and daring timepiece exudes energetic charge, demonstrates exquisite design, and displays Minjun’s iconic artistic vision at its finest. Here, we will explore the masterful creativity behind this stand-out horological vision – in anticipation of the possibility that you may add it to your own collection in time!

A Cult-Figure Of The Chinese Contemporary Art Scene

Artist Yue Minjun’s youth was set in the midst of a complex and fast evolving post-revolution China. Born in 1962, in the north-east of the country, Minjun’s parents were both oilfield workers. This tie to the quickly-industrializing nation would play a significant role in the early life of the artist, who himself spent time engaged in deep sea oil drilling. However, in parallel, Minjun’s flare for artistry was taking shape. After initial intention to work as an electrician, Minjun changed course and studied fine art at Hebei Normal University. Here, he became captivated with the work of Chinese painter Gen Jianyi – another artist whose signature creations often involved expressioned faces, although these with more of a grimace than the defiant laughter seen in Minjun’s paintings.

After graduation, the artist moved to Beijing where his art career steadily propelled him from relative poverty to a life of great success. His most renowned and prolific work features his own face upon characters sets within a broad variety of painted scenes. Each face bares the same expression of empowered and invulnerable laughter. Many consider Minjun’s art to be representative of the Chinese Cynical Realism art movement, including famed art critic Li Xianting, and some find his pieces politically provocative, although Minjun prefers not to categorize his work, and denies any intent of statement. The instantly recognizable facial features of the artist’s jovial subjects can be seen upon the Monkey King, deftly hand painted on the dial of each striking Hublot timepiece. This collaboration with Hublot follows other dual creations, such as those with studio AllRightsReserved, and American contemporary artist KAWS.

Bold and modern Swiss watch manufacturer Hublot found its perfect pairing in artist Yue Minjun, with both enjoying renowned for breaking ground into new aesthetics. When charged with designing a face for Hublot in celebration of the Chinese year of the Monkey, Minjun chose the Monkey King as his muse. This legendary figure of Chinese mythology can be traced within literature dating back to the 16th-century, and enjoys modern-day references in hit media franchises ranging from Dragon Ball to Monster Hunter.

When discussing his affection for the beloved simian, Minjun explained that this unorthodox mythological hero “symbolizes the powerful Chinese people who do not fear authority”. Although other notable watchmaker’s have created many a tribute to Chinese culture – including many marking the year of the monkey – its creators consider the Hublot x Yue Minjun Classic Fusion Wristwatch to be a first, and impassioned horological enthusiasts will most certainly agree. This is a timepiece quite unlike any other, only adding greater allure to its rarefied nature.

The impactively hued face of the Monkey King fills a vivid blue dial, further adorned with symbolism. A crescent appears at the 12 o’clock, while only five Arabic dial numbers can be found, with each representing a specific concept. The marker at 4 o’clock stands to represent the team of one master and three disciples. Those at 10 and 8 o’clock make reference to a tale of the Monkey King questing 108,000 li (54,000 km) to retrieve a scripture. Meanwhile, the numerals at 7 and 2 o’clock celebrate the Monkey King’s seventy-two metamorphoses – a number that we will return to in a moment. The wristwatch’s generous and multi-textured 41mm case features six of Hublot’s signature H-shaped titanium screws, spaced equally around the bezel. This brand iconography is matched by an “H” on the golden crown.

Three versions of the Hublot x Yue Minjun Classic Fusion Wristwatch were released, each boasting a different choice of case color and material, and strap color. The first two – with a rose pink strap and black ceramic case, and a dark blue strap and titanium case respectively – were created in editions of seventy-two, paying tribute once more to those numbered metamorphoses. The final edition features a Chinese red strap and gold case and bezel. Of this highly limited version, only 12 watches were made, in reference to the twelve years of the Chinese lunar calendar. Each of these marvelously unusual and stimulating timepieces boasts a natural rubber lined alligator skin strap, and Yue Minjun’s signature can be discovered printed on the case back.

Learn about Journeying To The Edge Of Art With Daniel Arsham.