All About Coarse: Visionary Creations From Mark Landwehr and Sven Waschk 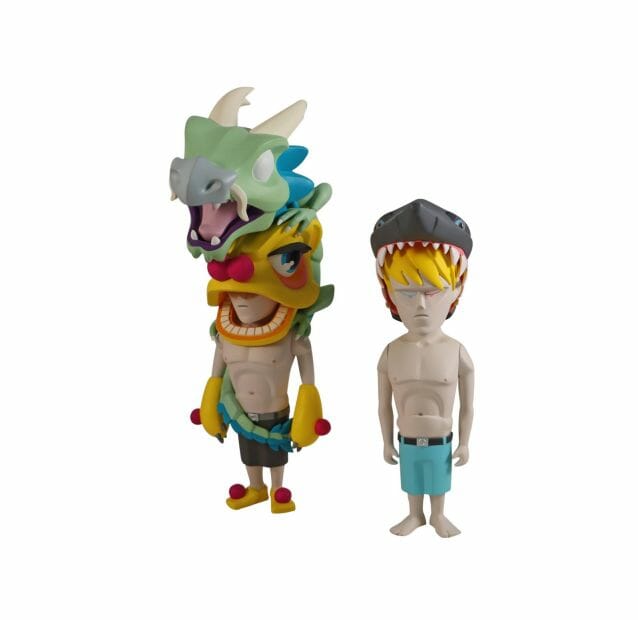 06 Jan All About Coarse: Visionary Creations From Mark Landwehr and Sven Waschk

To step into the world of Coarse (began by Mark Landwehr and Sven Waschk)  is to slide sideways into a whimsical world of fantasy, adventure, and layered intricacy. Within the thrumming scene of contemporary art toy collecting, few creators rival Coarse in terms of attention to detail. Unsurprisingly, it is this exact eye for the exquisite that has propelled the creators behind Coarse into the arms of a dedicated following. Their captivated audience continues to expand, thanks to a range of impressive collaborations in three dimensional vinyl. Let’s dig a little deeper, and discover the whos, hows, and whys behind the Coarse brand.

How Did Coarse Come About?

IIt seems hard to imagine that something as encompassing as Coarse could have come about as form of escape, but for Mark Ladwehr, that’s exactly what it was. Between miserable weather and a dreary day job, his life in Hannover, Germany, called for greater meaning. Mark Ladwehr began sculpting as a tool for self distraction, making the surf and skate culture of distant and sunny California his muse. Fashion brand Vans took notice of Mark Ladwehr’s early work, and helped him launch Coarse, as a new player within the vinyl art toy scene.

Finally escaping his German home town through more than just creative outpouring, Mark Ladwehr began exhibiting his work both in Europe and the United States. Soon, he relocated to the beating heart of the art toy world itself, Hong Kong, where he continued to hone his craft. Here, he met Sven Waschk and, in 2008, the two joined forces to make Coarse into a team venture. In 2013, the brand moved once more, this time to Los Angeles, where it remains today – as a workspace, gallery, and base as their exhibitions carry them around the globe.

When we look at a vinyl art toy, we can both infer and project an interpretation of what we see. However, in the case of Coarse creations, each piece comes with a beautifully crafted narrative, that weaves masterfully into a mysterious universe of their own creation. Familiar characters reoccur, such as noop and nism, as Coarse explores human complexity, addressing topics such as sexual identity, interpersonal conflict, and the passage of time.

Their sculptures, known within the art world as Coarse Originals, serve as elements within collections, under titles such as Ethos, Lustre of Life, and Prisoners Beside Me. Each piece features fine detailing, perfectly executed expression, and a vibrant palette of color and texture. Brought to life within their expansive warehouse studio and gallery, original works are realized in wood and resin. Coarse accept appointments at the studio for those hoping to acquire an original piece.

Alongside ongoing shared ventures with Vans, Coarse have been coveted by companies hoping to be invited into the fantasy realm populated by their unique aesthetic. Warner Bros invited Coarse to reinvent the playable character Scorpion from the Mortal Kombat game series. The result was a Mortal Kombat X Kollector’s Edition figurine. In 2014, Amnestly International approached Coarse, asking them to conceptualize a series of Freedom Candles. The candles were auctioned off over the course of three days, with one candle releasing every 30 hours. The collection featured three designs, with each melting to reveal a second figure concealed within. The first was a political prisoner under torture, who melted to reveal the same man being reunited with his son. The second was a military rifle, which melts to reveal a pen – representative of the pen that signed the international Arms Trade Treaty. The last was a female victim of sexual slavery, who melts to reveal an strong, antonymous woman. All proceeds from the sales went to Amnesty International causes.

Stirring The Souls Of The World’s Art Toy Collectors

Alongside the availability of Coarse originals, every few months one piece is selected to be duplicated within a run of limited edition vinyl reproductions. Fans can acquire these in the Coarse online store, and at a select number of galleries and stockists worldwide. Passion for the work of this gifted duo within the world of collectibles can be attributed not only to the spectacular composition of the art toys themselves, but to the sheer brilliance of the packaging and presentation.

Each reproduction comes packaged in a unique, and often intricate, box. Striking imagery, unusual forms, brightly colored cut-outs, and even teeth grace Coarse packaging, making each box as alluring to the collector as the precious item within it. As loyal followers sink further and further into the mystical experience that Coarse provides, and as story is built upon story within the Coarse mythology, we are certain that these art toys are only set to become more prized.

Read about The Sky’s The Limit For Visionary Dutch Artist Piet Parra.